Meet one of our latest patients.. 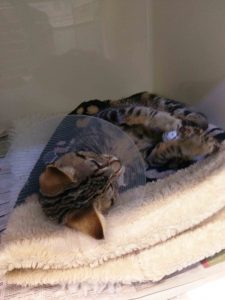 He recently stayed at our Conway Drive practice after his owners noticed he wasn’t himself after chewing on a children’s toy.

After blood tests, medications and fluids he was much brighter but still not back to his normal self and an ultrasound revealed a blockage in his intestines.

The blockage was caused by a foam letter that poor Freddie had swallowed. This is referred to as a foreign body and needed an exploratory laparotomy operation to find and remove it from Freddie’s intestines.

As you can see from the photos he was soon back to his normal happy self, playing with toys and wrapping our nurses around his paws!