Brachycephalic dog breeds are increasing in popularity, but one thing most new owners don’t realise is that they can be quite a challenge to care for.

Brachycephalia means ‘shortened head’ and refers to the dogs flat and wide skull shape. The appearance of the head appears as though the skull has been severely compressed from front to back, they will also appear flat faced with short noses.

Ownership of brachycephalic dog breeds have increased by 3104% since 2007 according to Kennel Club Figures, the rise could be a result of more celebrities being pictured with these dog breeds, resulting in a dog ‘trend’.

Popular breeds that are classed as brachycephalic include:

(Please note, not all breeds affected are listed above)

The reason that these breeds may be more challenging to care for is due to the number of health conditions they can possess.

Although these flat-faced dogs are cute, their short noses can also cause breathing problems. These dogs often suffer from snoring and snorting, and although these may seem harmless, it could be an indicator that their airway is becoming partially obstructed, and this can become worse over time.

These dogs have been bred mainly for their looks, but the flat-face look is a result of a smaller upper jaw, in which the tissues inside are bigger than the jaw can allow. The airway problems that result from this overcrowding are collectively known as ‘brachycephalic airway syndrome’.

The upper airway abnormalities that occur in this syndrome include:

A dog with brachycephalic syndrome may be affected with a combination of one or more of these abnormalities. 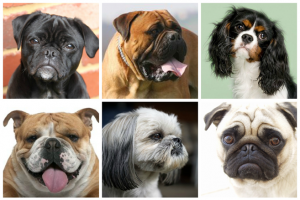 Not all brachycephalic dogs will have all these symptoms, but if your dog is presenting more than one symptom, it’s important to get them seen by the vet as soon as possible. The following signs and symptoms you should keep an eye out for are:

If your dog does any of the above, and you’ve come to think of it as ‘normal’, it’s still worth visiting your vet to check their health. Symptoms generally progress with age and typically become more severe as they age.

What other problems do brachycephalic dogs have?

Eyes and Eyelids: Brachycephalic dogs’ eyes tend to protrude out of their skull a bit more than other dogs. Sometimes it’s difficult for eyelids to close over their eyes (even while sleeping), this can lead to a lack of lubrication over the cornea and can also cause corneal ulceration.

Teeth: Brachycephalic dogs have the same number of teeth as other dogs, but less space to fit them all, which can lead to periodontal disease.

Usually your dog will not require active treatment unless it shows signs of clinical problems. 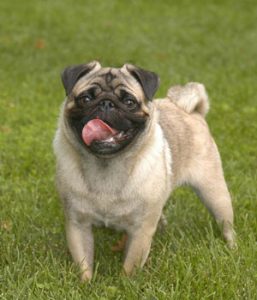 Treatment will vary depending on the type, cause and severity of the problem(s). Surgery, such as shortening an elongated palate or widening the nostrils, can prevent some breathing problems. Your vet will monitor the dog’s breathing, pulse, heart rate, temperature and other factors when surgery is performed.

How can I help my dog?

You can help your brachycephalic dog by protecting it from warm, humid weather and keeping its weight in check as obesity can worsen respiratory problem.

It’s important you schedule check-ups for your pet, this will not only monitor their overall health, but also offer you advice on diet and exercise, to give you peace of mind and to also keep your canine happy.