The NADIS Liver Fluke forecast uses veterinary surveillance combined with weather reports to predict the risk of disease over the coming months. ‘There was an increase in diagnoses of liver fluke disease at the start of this year and the risk of acute fluke is forecast to be high in some parts of North West England and North Wales. It is therefore likely, that treatment for acute fluke will be necessary during October on farms in these regions, especially where there is a history of liver fluke disease.’

Fasciolosis is a common parasitic disease of both cattle and sheep in the UK, caused by Fasciola hepatica and is estimated to cost the cattle industry £23 million annually.

In cattle, infection is more commonly encountered in beef cows grazing poor wet pasture but disease can be seen in dairy cattle especially after summering cattle, most likely bulling heifers, away from home on infested pastures. 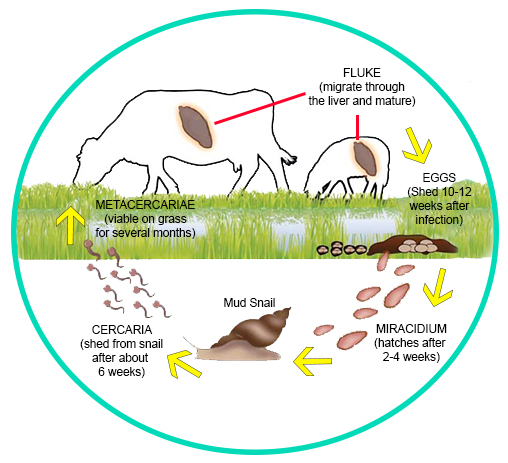 The life cycle involves a snail host whose activity and availability require adequate moisture and a suitable ambient temperature during the summer months.  Recent wet summers (2015) have been ideal for this complicated fluke lifecycle by supporting large numbers of snails in wet habitats. Cerceriae are released from snails between August and October which develop- into the infective metacercariae, which can survive on pasture for several months to infect grazing cattle.

Beef Cows – The clinical signs are similar to those encountered in dairy cows but can be especially severe in spring-calving beef cows where liver fluke exacerbates the metabolic demands of advanced pregnancy in cattle on marginal winter rations. This results in the birth of weakly calves to cows with little milk, causing high perinatal losses. Severely affected cows may become debilitated with an increased incidence of metabolic and infectious diseases at calving.

Twin-bearing cows show the most severe signs due to the high demands of two foetuses. Unlike infestation in sheep, peripheral oedema is a less common finding with chronic fasciolosis in cattle. Severe infections may cause anaemia.

Fattening cattle – UK slaughter plants are reporting increasing numbers of liver condemnations due to fluke damage in 12 to 18 month-old fattening cattle where reduced live-weight gains were not suspected by producers presumably due to low-moderate infestation levels.

Weight loss and chronic diarrhoea in individual cattle will also be investigated by your veterinary surgeon for paratuberculosis and salmonellosis. Chronic liver fluke and paratuberculosis have been reported in the same animal. Other causes of chronic weight loss in adult beef cows could include other bacterial causes such as pyelonephritis, vegetative endocarditis, chronic mastitis, and chronic suppurative pneumonia.

Inadequate nutrition generally presents as a whole group/herd problem of poor production and weight loss during the late winter months in beef herds with diarrhoea an uncommon finding unless poor quality silage is fed.