White line disease is a non-infectious claw horn disease of cattle. The white line is the area of the sole of the hoof where the wall horn meets the sole horn. The horn along this junction is prone to damage, particularly from shearing (sideways) forces. Sole thinning as a result of increased wear can also cause the sole to flex more with resultant damage to the white line structure.

The feet may be subjected to shearing forces if cows have to turn tight corners, or change direction suddenly, for example if being herded forcefully or if trying to escape a bully cow.

If the white line becomes damaged it can become impacted with stones and debris. The resulting infection leads to the formation of an abscess and a sudden onset of lameness. Any cow exhibiting a sudden onset of lameness should have the affected foot lifted and examined at the earliest opportunity. The foot should be trimmed using the five-step Dutch method and the area where the white line has been damaged should be carefully explored until the abscess can drain. Anti-inflamatories should be administered and a block should be fitted to the healthy claw. Early treatment promotes faster resolution and minimises the impact the lameness will have on milk production and fertility.

Key areas to focus on to prevent white line disease include: 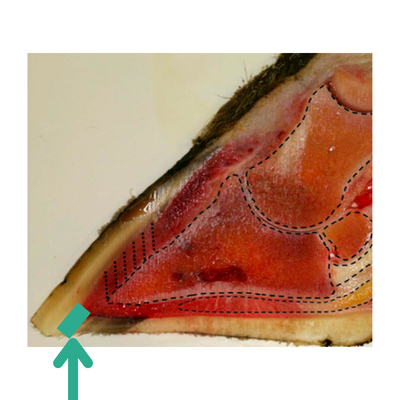 The white line is located at the junction of the hoof wall and sole. This area is susceptible to damage from shearing forces. Once damaged, the area can be penetrated by stones and foreign material which may lead to the formation of an abscess. A white line lesion is when the white line has become impacted with debris following damage. The resultant abscess will cause a sudden onset lameness.