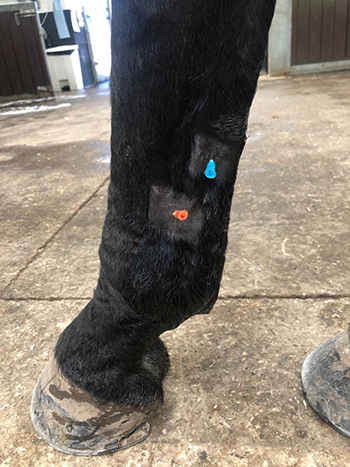 A nerve block is the deposition of local anaesthetic into the area immediately surrounding a nerve body or ending. This stops the nerve from transmitting signals relating to pain back to the brain, hence pain is prevented or “blocked”. Practically, the term nerve blocking is often used to describe the placement of nerve blocks in the truest sense, and also the deposition of local anaesthetic into joints and into the tissue surrounding the spinal cord (an epidural), rather than around nerves.

Placing needles into highly sensitive and sometimes painful areas of a horse is obviously potentially risky to the personnel involved. However experienced, calm, sympathetic handling & restraint (often coupled with some form of oral enticement!) is often sufficient to allow the placement of a block. Where this is not possible, the administration of mild sedation prior to the procedure, often allows for it to be performed safely in the vast majority of horses.

By preventing sensation of pain, nerve blocks can be used to allow the performance of certain surgical procedures under standing sedation rather than under general anaesthetic which can decrease the risk of a procedure to the horse, and the cost to the owner. Examples of this include cheek tooth removal, sinus surgery, surgical correction of “kissing spines” (dorsal wedge ostectomy) and wound reconstruction.

Another use is localisation of pain, most commonly orthopaedic pain or lameness – know as diagnostic analgesia. Whilst observing a lameness informs us that a horse has pain in a certain limb, it does not tell us where in the limb the problem originates. Sometimes this is obvious i.e the presence of heat, swelling and/or pain on manipulation of a certain part of the limb, but in many cases there is no visual or palpable sign of pain. It is such cases where nerve (or joint) blocking can prove invaluable. 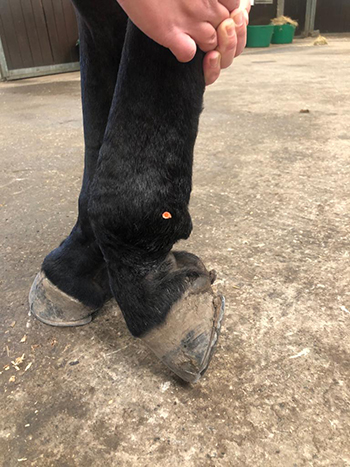 The procedure involves observing the horse moving in a straight line, on circles on both reins and on firm and soft surfaces. This allows grading and characterisation of the lameness. A nerve block is then placed, stopping the sensation of pain in a specific area. Once this has had chance to take effect, the horse is once again observed moving as previously. Any substantial reduction of lameness can therefore be attributed to pain coming from within the area that has been desensitised by the nerve block. If the lameness is unchanged, it can be deduced that the source of pain is not within the blocked area of the limb, and further nerve blocks can be performed to desensitise other area of the limb until the source of lameness is known.

Once the area responsible for the lameness is known, diagnostic imaging (e.g. radiography, ultrasonography, MRI) can be performed allowing the identification of abnormalities. It is important to mention at this point, that untargeted imaging of the whole limb often results in the identification of abnormalities or variations from normal. Without having confirmed that the area being imaged is definitely the cause of lameness, it can be difficult to decide whether these abnormalities are significant

to the lameness or just incidental findings (i.e. slight abnormalities which are present but not causing any problem).

In conclusion, the use of nerve blocking allows identification of the region of the limb causing the lameness. This in turn allows focused imaging which results in the identification of significant abnormalities only, and a precise diagnosis. This means that the best treatment plan can be selected. It also allows an accurate and realistic prognosis to be given, i.e. how likely a full recovery is, how long it will take, and what the horse will be capable of in the future.

The aim remaining at all times, to make your horse pain free and able to provide enjoyment to you as their dedicated owners.