Are jellyfish stings dangerous to dogs?

Are jellyfish stings dangerous to dogs? 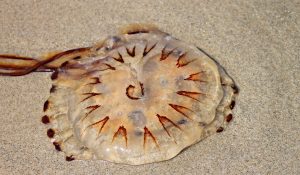 On the Lancashire coastline, it’s not uncommon to see jellyfish washed up on

the beach. You may approach them to have a closer look, but you generally wouldn’t touch them and neither should your dog!

Washed up jellyfish may be dead, but they still have the ability to sting for several weeks. Dogs often like to investigate everything they come across, but if a jellyfish stings your dog, it’s important to get them seen by a vet as soon as possible.

A jellyfish sting can be very painful, especially to your dog. If you think he’s been stung it’s important you follow these steps:

1.) Pull the remaining tentacles off with a stick or towel, but never rub them and be careful that you don’t come into contact with them.

2.) Never rub the injured area with sand and always clean it with sea water rather than fresh water.

While it’s unlikely your dog will die from a jellyfish sting, or from licking or swallowing a jellyfish, it can cause an array of symptoms from two minutes to 3 hours after the sting.

There are many types of jellyfish in the ocean, and they have developed several different types of toxins. Common symptoms of a jellyfish sting include:

The recovery time for dogs stung by a jellyfish ranges from two to 48 hours and most dogs usually recover with no side-effects.